Peoples data on land, what for?

Presentation of regional results of the Land Governance Index (LANDex) 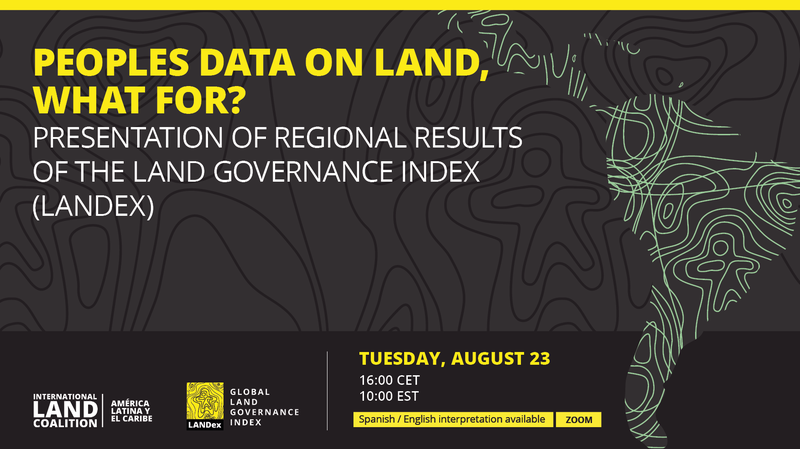 DATA IS KEY TO DECISION-MAKING.

THE INTERNATIONAL LAND COALITION (ILC) HAS A TOOL FOR GENERATING DATA ON LAND GOVERNANCE: LANDEX.

It aims to build a global land governance index - through a scoring system ranging from 0 to 100. This tool monitors progress towards people-centred land governance and the achievement of the land-related Sustainable Development Goals, using common indicators - considering legal frameworks, their implementation and impact - that are being used in 12 countries in LAC (out of a total of 30 worldwide).

The index is fed by a common set of indicators that consider three types of data sources: official information for calculations, information derived from collaborations with other data collection initiatives, and information and data generated by people [1] to ensure inclusive collection from different perspectives. In this sense, LANDex relies on the generation of (complementary) people-generated data and the combination of these with official data, equalising their value by placing them in the same place and allowing a horizontal dialogue between them.

The implementation of LANDex in the region started in 2018. Currently, the tool has been applied in 12 countries - Colombia, Peru, Ecuador, Bolivia, Guatemala, Nicaragua, Argentina, Belize, Saint Lucia, Trinidad and Tobago, Grenada, and Saint Vincent and the Grenadines - and these countries have had diverse experiences of using the data (advocacy, report writing, among others) they generated. This webinar will share the results obtained, the ways in which they have been used, and the challenges for the positioning of complementary data, particularly those generated by people.

[1] Data generated in LANDex from the implementation of expert surveys, representing 17 of the 33 indicators that make up the tool.